Today I decided to throw off the shackles of “recipes” and set off into the deep dark unknown (well, sort of). This loaf uses vaguely the proportions of flour, water, and starter suggested by a recipe but ended up veering off into something that just “felt right” to me. In hindsight I make a few questionable choices, but the finished product was still pretty good so now I’ll work on refining the process into something that can hopefully be repeated.

I started by feeding my starter until it was extremely bubbly and active. I’ve started using a higher proportion of water to make it a little thicker – I think that makes it easier to tell when the starter is ready because it will expand a lot. 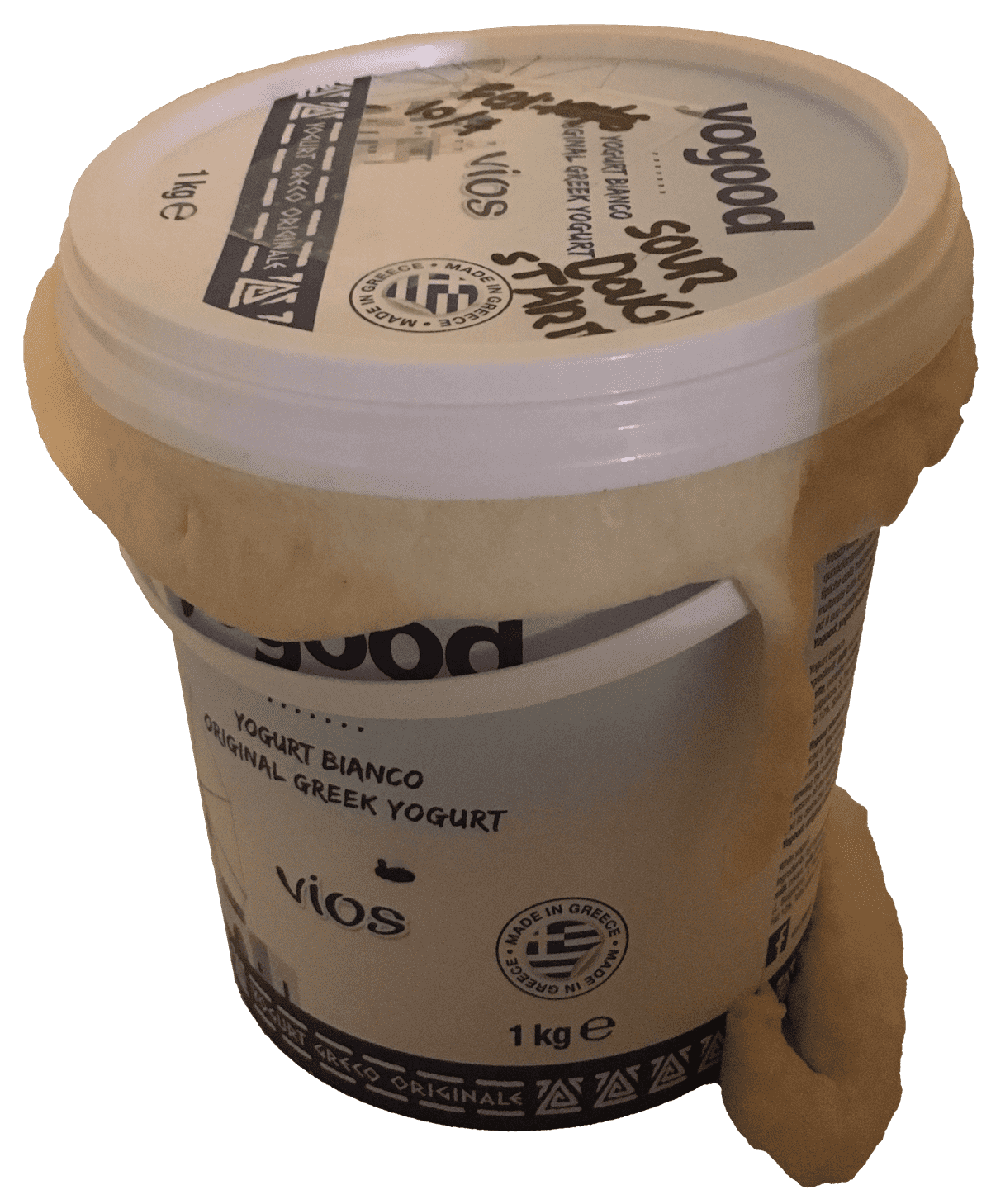 I think my starter got a little too excited… 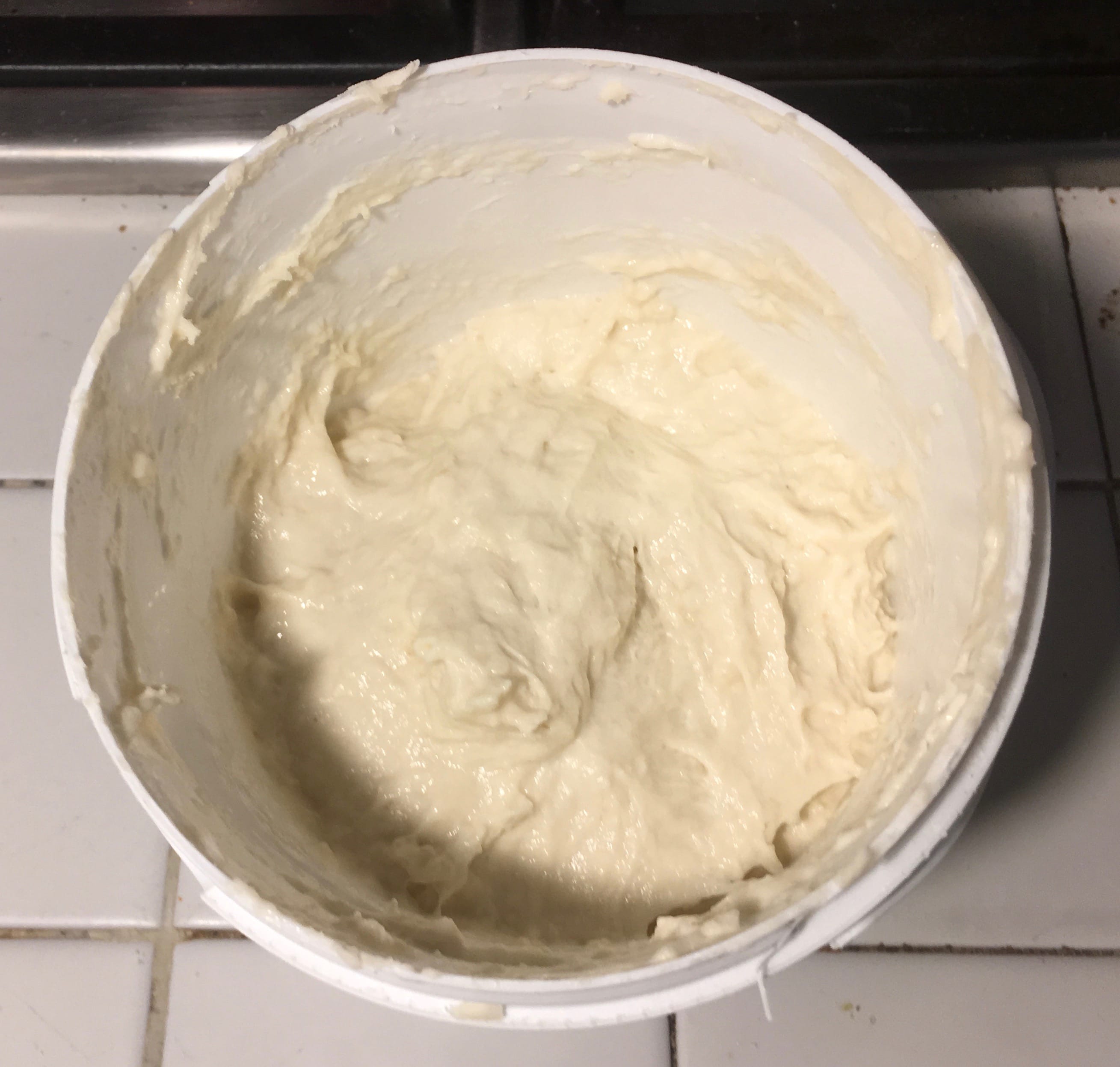 This is about the consistency that it had when I used it for this recipe.

I mixed up the starter, flour, and water in a large bowl, pinching together between my thumb and other fingers until mixed. I kneaded the dough for a minute or so in the bowl until it was able to hold its form a bit better, then dumped it out onto a floured work surface and kneaded it a couple of minutes longer.

At this point I realized that I had forgotten the salt, so I added some of that on top and tried to incorporate it as best as possible by pinching together the dough again (which I think was reasonably successful 🙃). All in all I think I kneaded for about 5-7 minutes.

I placed a floured dish towel into a colander and dumped the dough in there, covered it with the towel, and let it sit for a couple of hours. 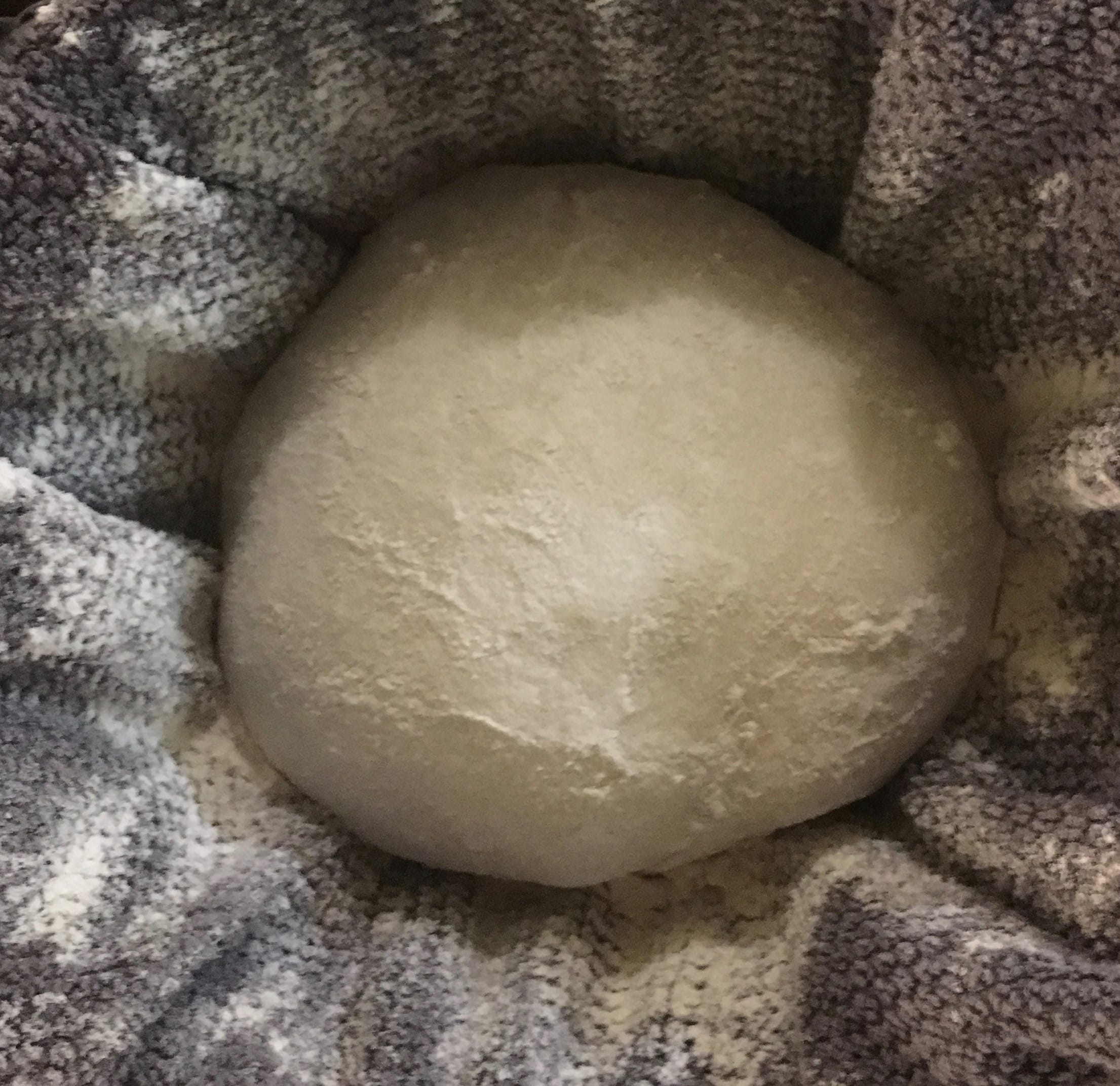 I thought that this was “proofing,” but I had forgotten to form a loaf, so there will be more steps – read on…

At some point I realized that I needed to actually form the loaf. I also noticed that the dough was dry on the outside and starting to crack, which seemed bad to me. 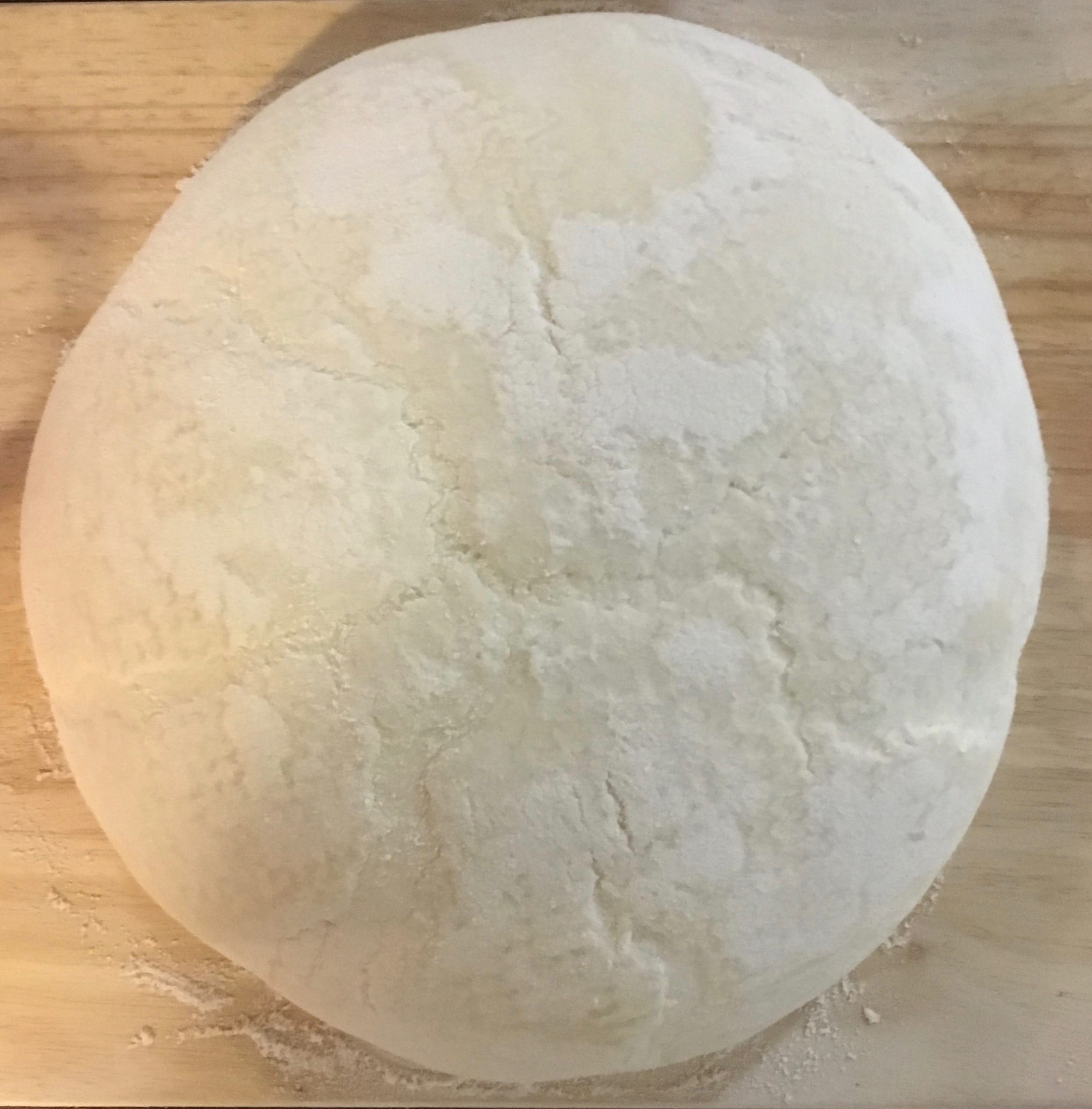 I dumped the dough out onto a floured cutting board, added some olive oil in an attempt to reverse the drying out, and kneaded/mixed in the oil for another 5 minutes or so. 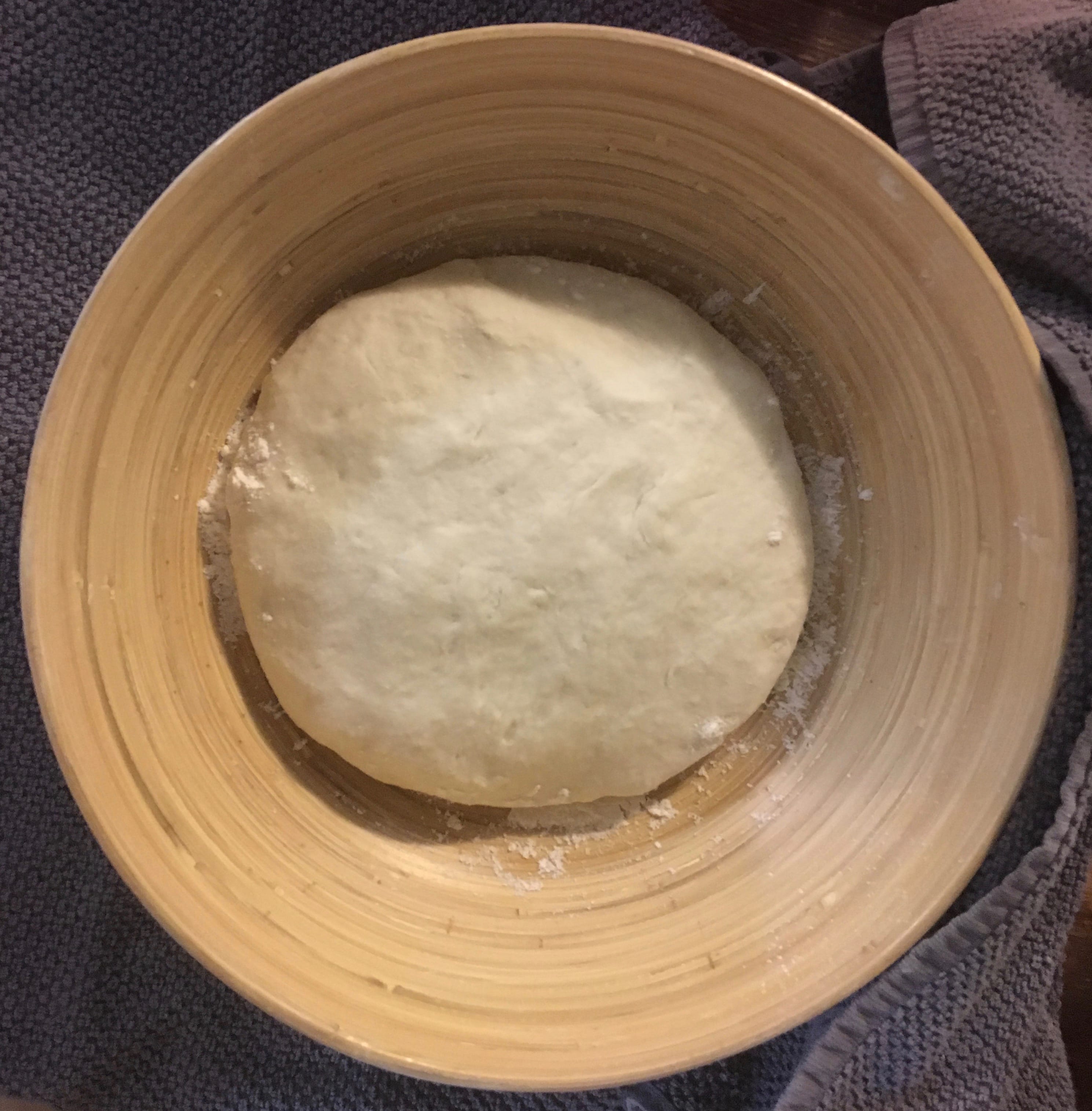 I left the dough in a large bowl covered with a damp towel to rise again for a few hours, and hopefully not dry out on the surface again.

I came back, very gently folded in the four corners of the dough and flipped it over seam-side down. I pushed inwards and downwards on the sides to increase tension along the outside, and pulled the dough along an unfloured countertop, cupping my hands underneath it, to tighten the loaf. This strategy uses the friction of the dough against the counter to pull the edges together. (TODO: create a page about how this works). 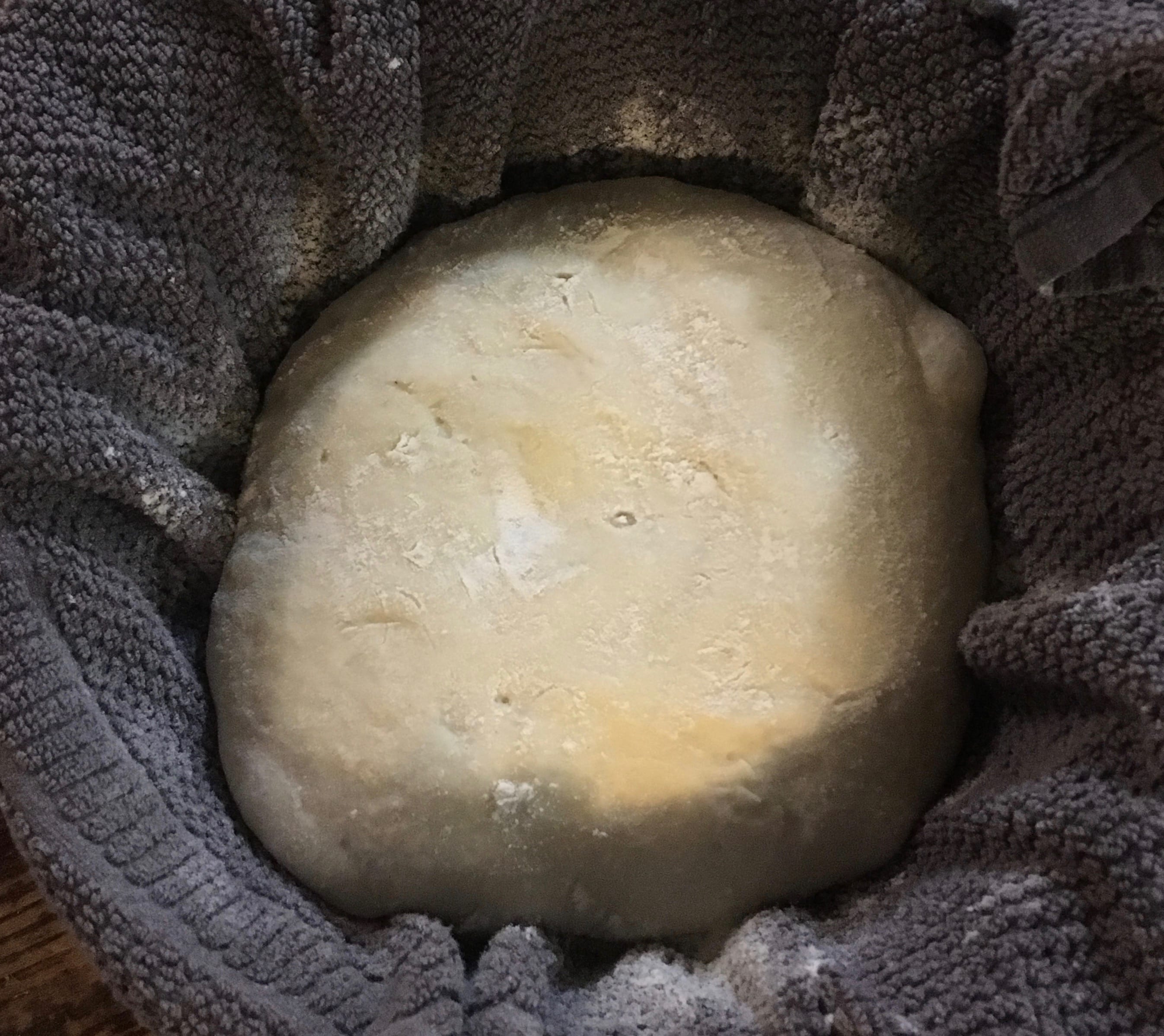 I then placed the dough back into the colander lined with the towel, seam-side up, covered it with another damp towel, and left it to proof for about 45 min to an hour.

I baked in a pot with the lid on for 25 min or so at 500℉, followed by another 30-ish minutes with the lid off at 450℉. I baked with the seam side down and scored the bread using a razor blade before baking. 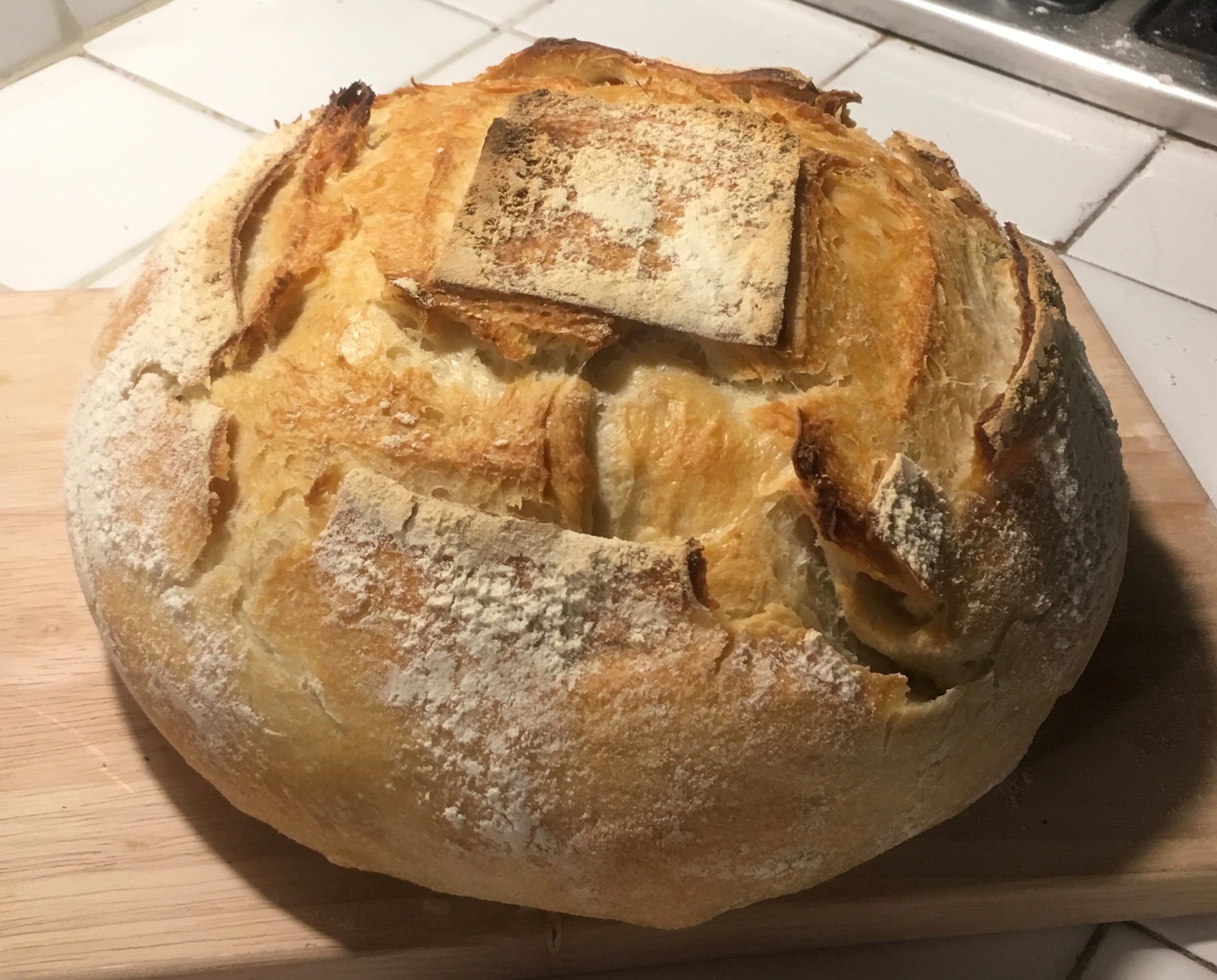 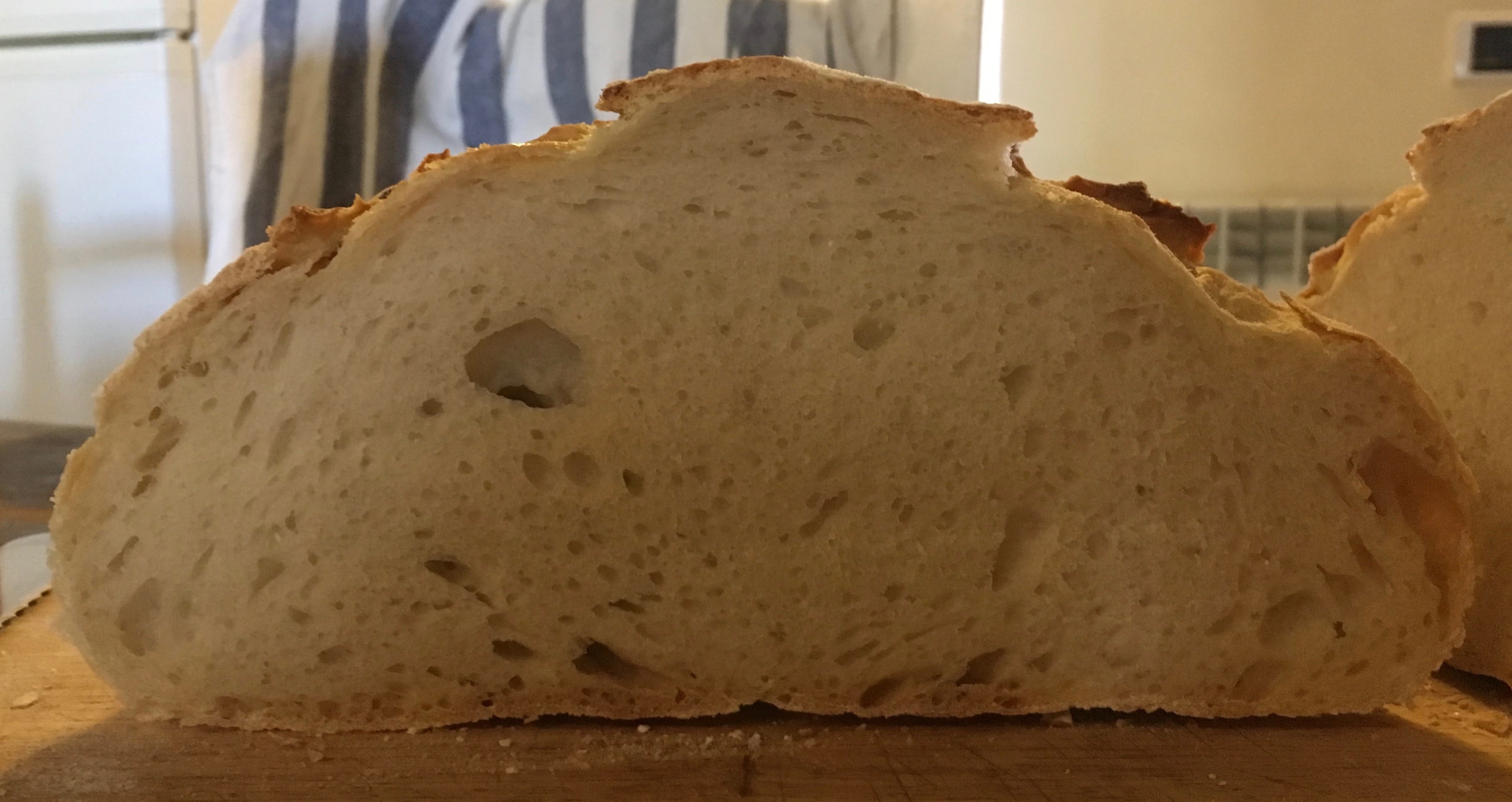 …and the obligatory crumb shot.

I was pleasantly surprised with how this bread turned out. It has really nice oven spring, though not much sour flavor (probably because it was only fermented for a few hours). The crumb is good, with small, regular holes (perfect for sandwiches!) and the crust is beautiful.

Next steps will be trying to replicate this recipe, and experimenting with changing single variables at a time to see how it affects the final product. Since this was slightly improvisational, I would like to better understand why it created the loaf that it did, and how I can distill the recipe down to the parts that actually contribute to the bread versus the unnecessary steps that I just performed because I wasn’t sure what to do. This will involve researching different techniques for sourdough as well as experimenting with what I read to see how it works in practice.

I would also like to try out different types of flour to see how that affects the bread’s structure and taste.