This is a modified version of More Interesting Bread Part 1 with further attempts to make it more interesting. Before baking, I switched my starter over to a diet of partially whole-grain flour in the hope that it would develop some more flavor. I’m also using the folding-during-rise method from this video.

For this bread, I again used a cup of whole-grain flour, some more sesame seeds, and some other type of flour that I bought but can’t remember what it was. I also added about 1/8 cup of olive oil, and more salt than last time. The flavor for this bread was much better than past attempts.

I started by mixing the flour, salt and sesame seeds in a large bowl. 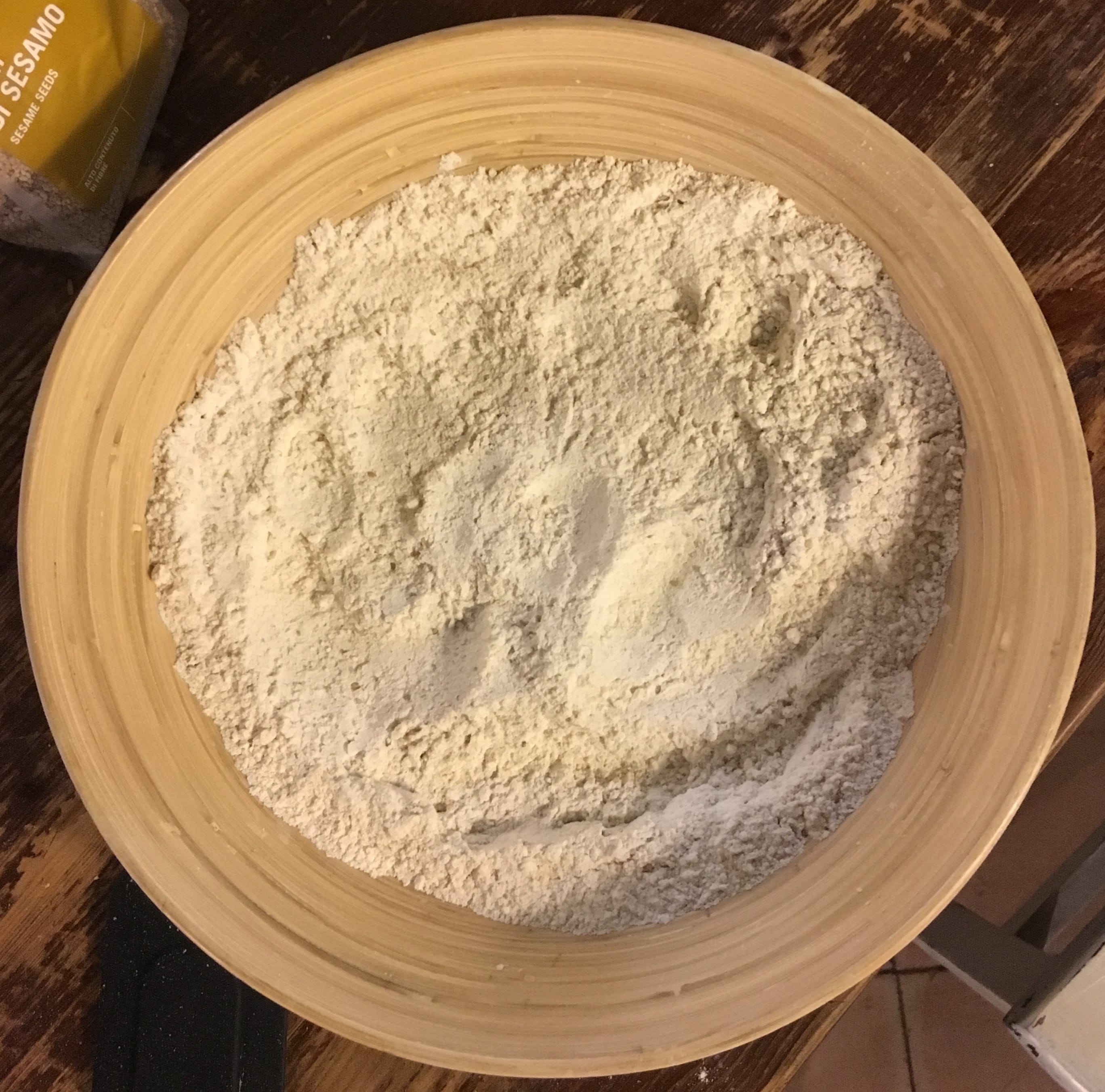 Then I added the starter, olive oil, and some of the water, gradually mixing while adding more water until I achieved a wet dough that could still hold its form relatively well. 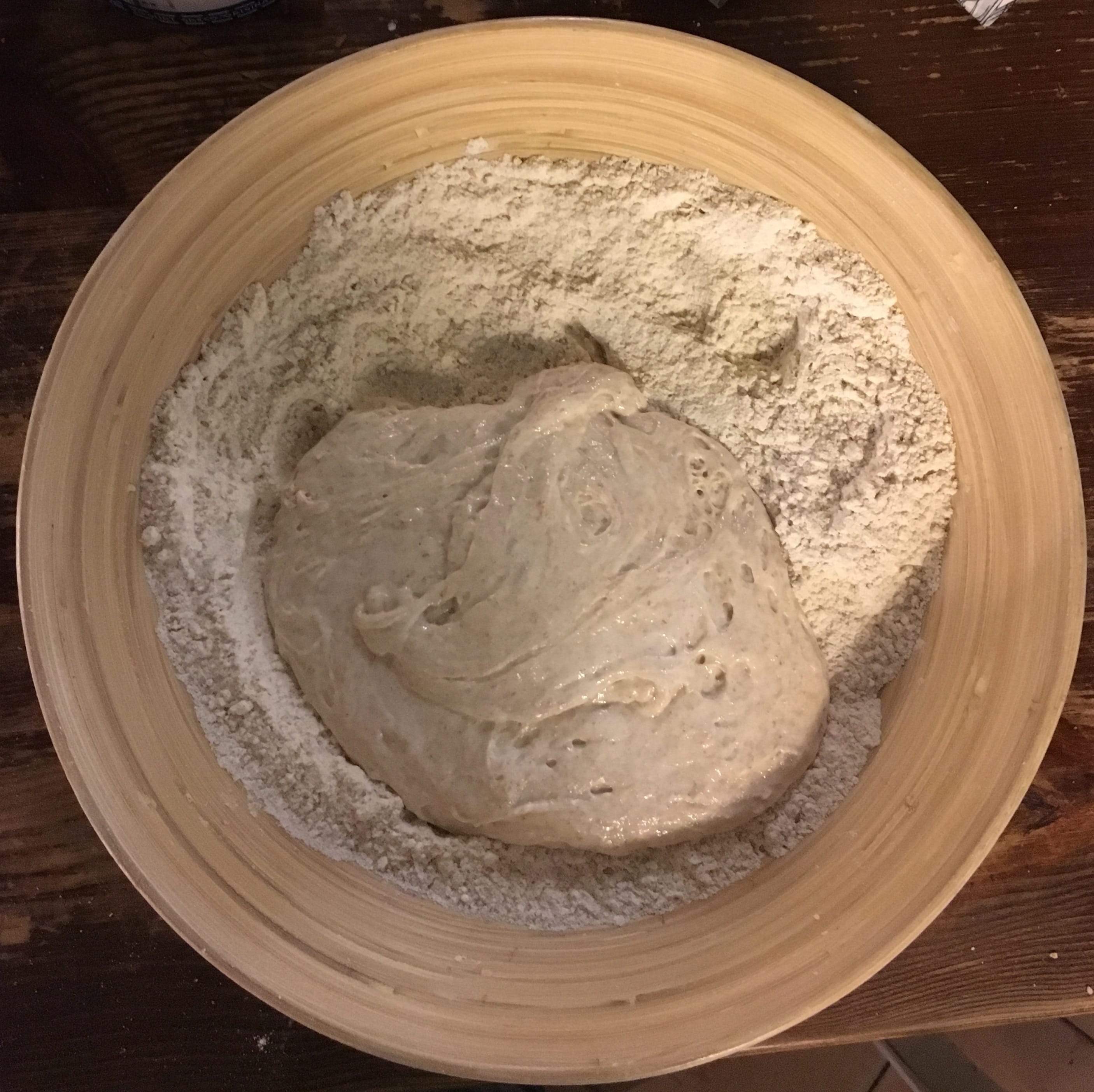 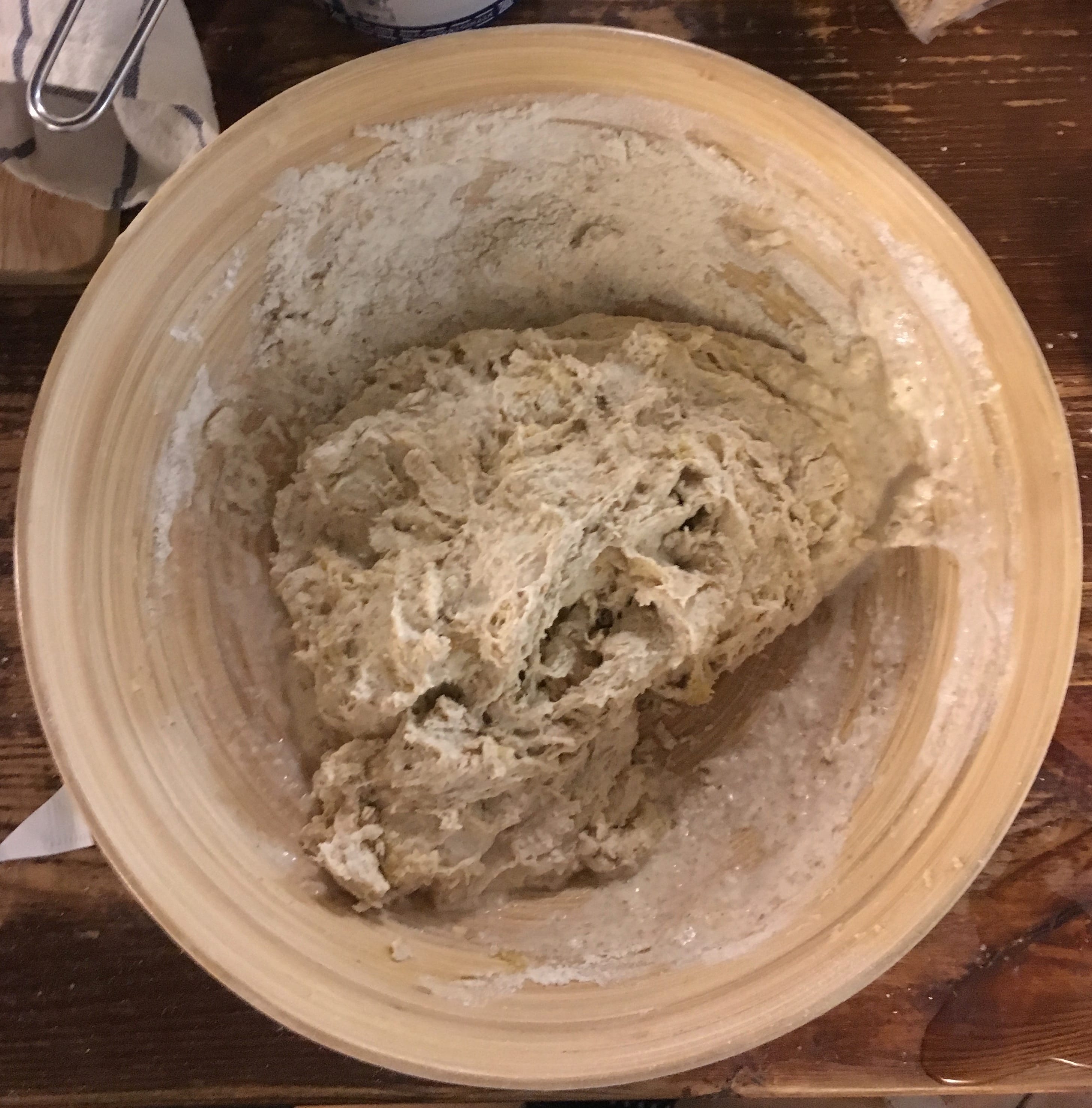 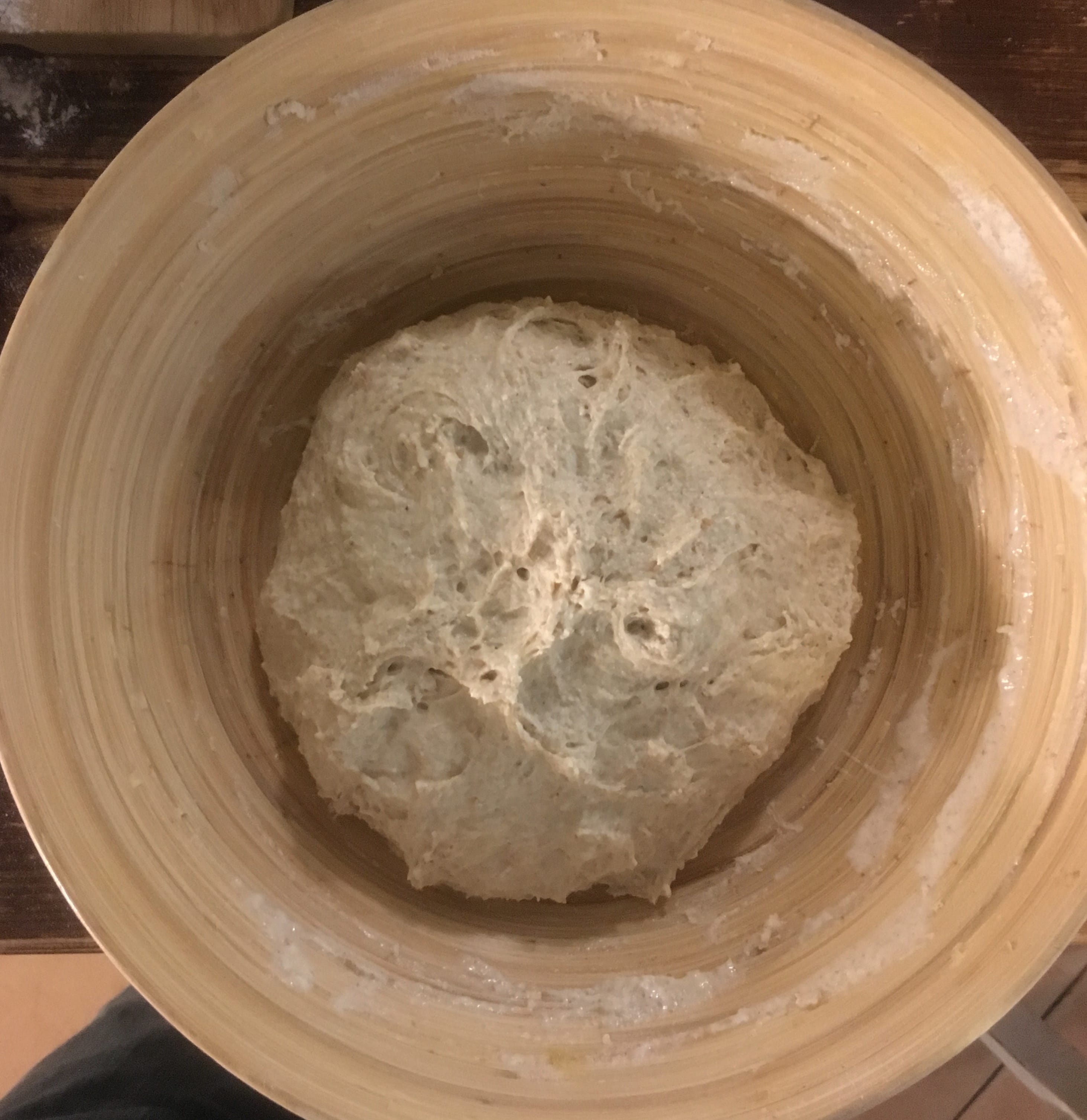 I let the dough rest for about 10 minutes before taking it out of the bowl and kneading until smooth and elastic. Then I placed it in a lightly oiled pan for the first rise, and covered it in plastic. I used a pan because that’s all I had, but any flat, clean, non-porous surface should be fine.

I actually used too much oil, which made it more difficult for the dough to stick to itself. You really don’t need much! 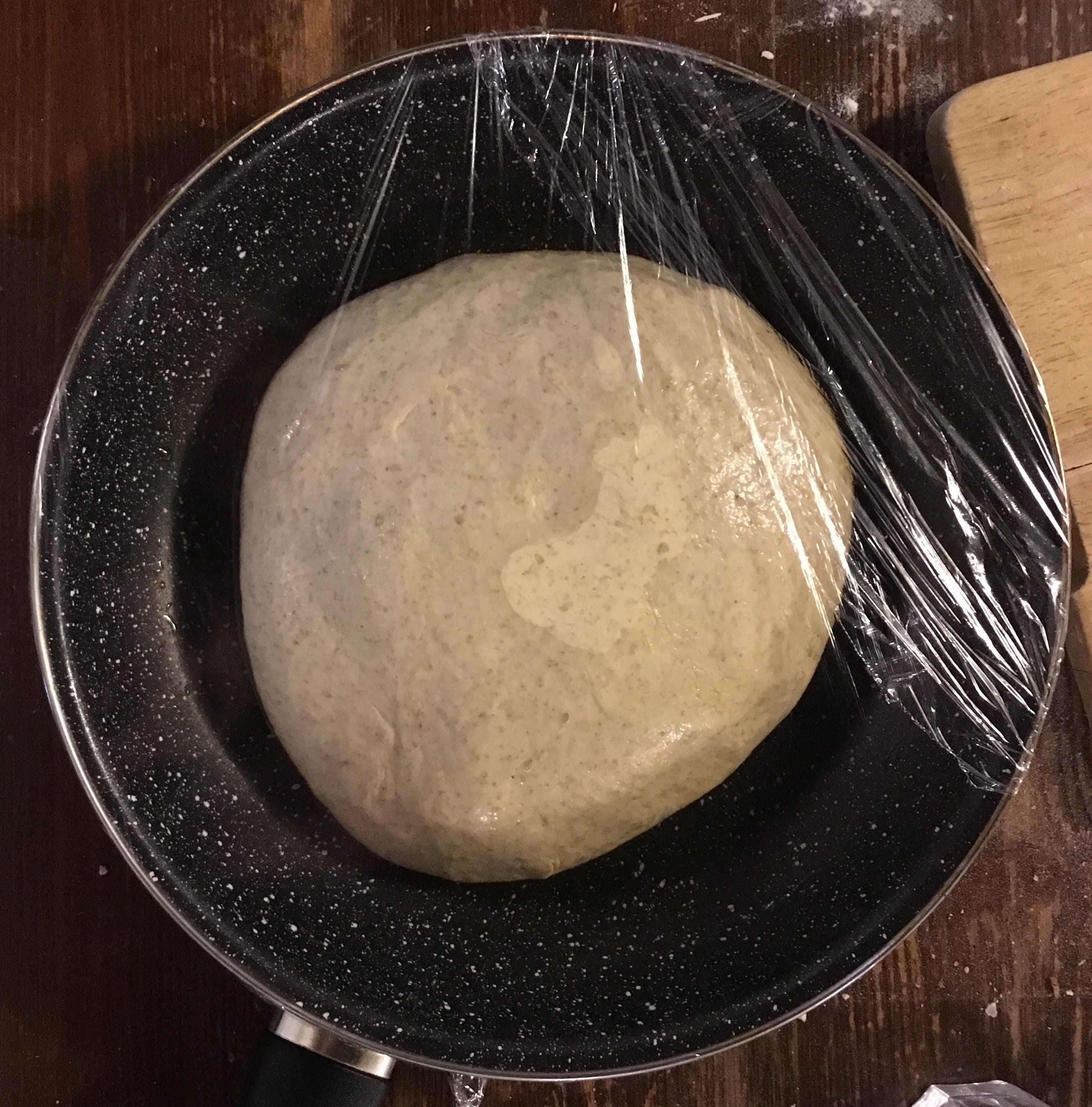 I let the dough rest for about about 4 hours, taking off the plastic wrap every 30-45 min to gently stretch the dough and fold it over itself. This helps to further stretch out the gluten without deflating the dough. 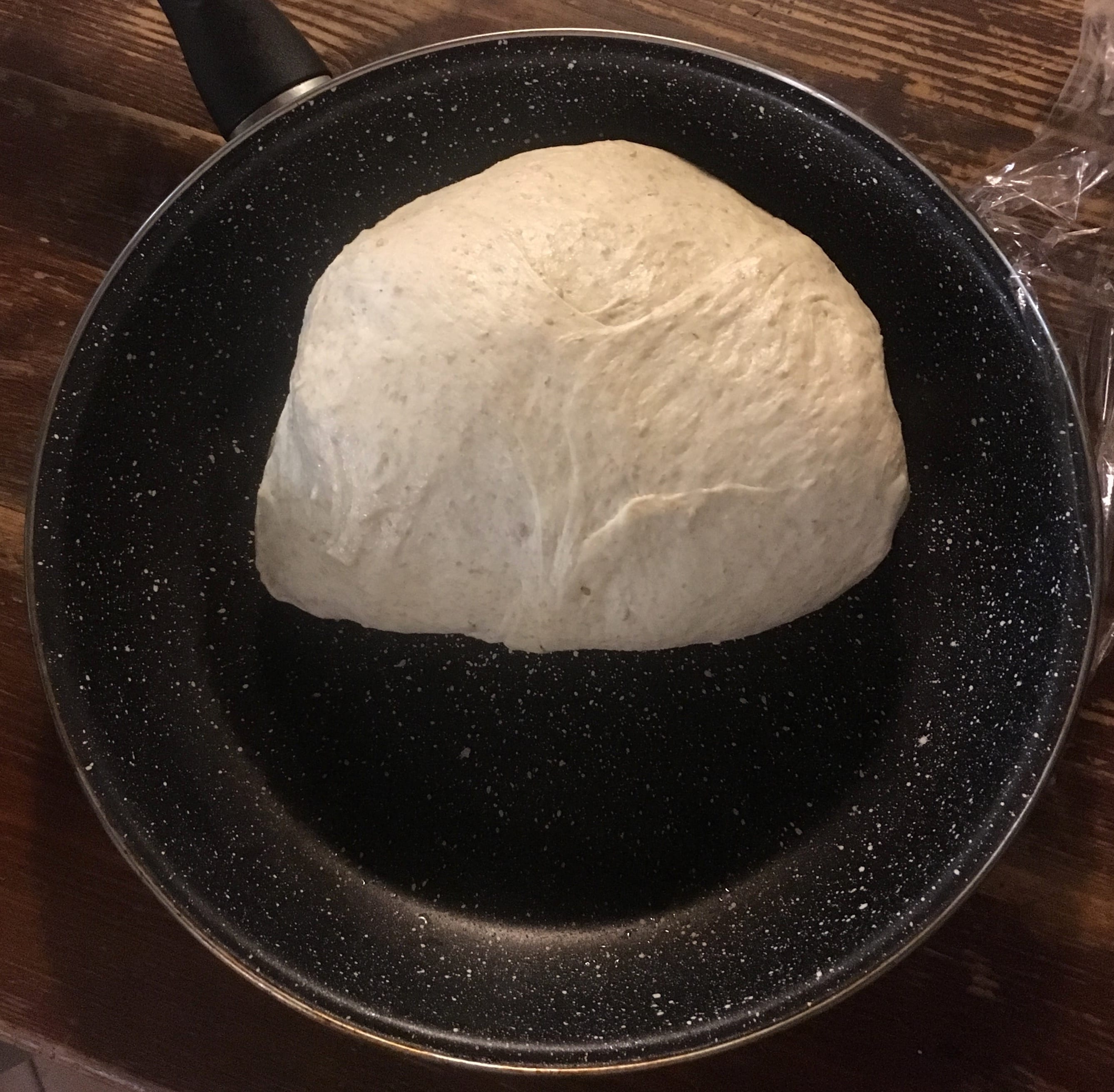 After this stage, I took out the dough onto a lightly floured cutting board. I gently flattened it a bit by slowly tugging at each side, then folded each corner into a loaf and flipped it back over, seam-side down. I worked around the edges to tighten up the top of the loaf a bit more, before flipping it seam-side up into a bowl lined with a floured kitchen towel.

I floured the top of the dough, covered it, and left it in the fridge overnight to proof. I hoped that the longer proof would allow more flavors to develop (which seemed to work!) 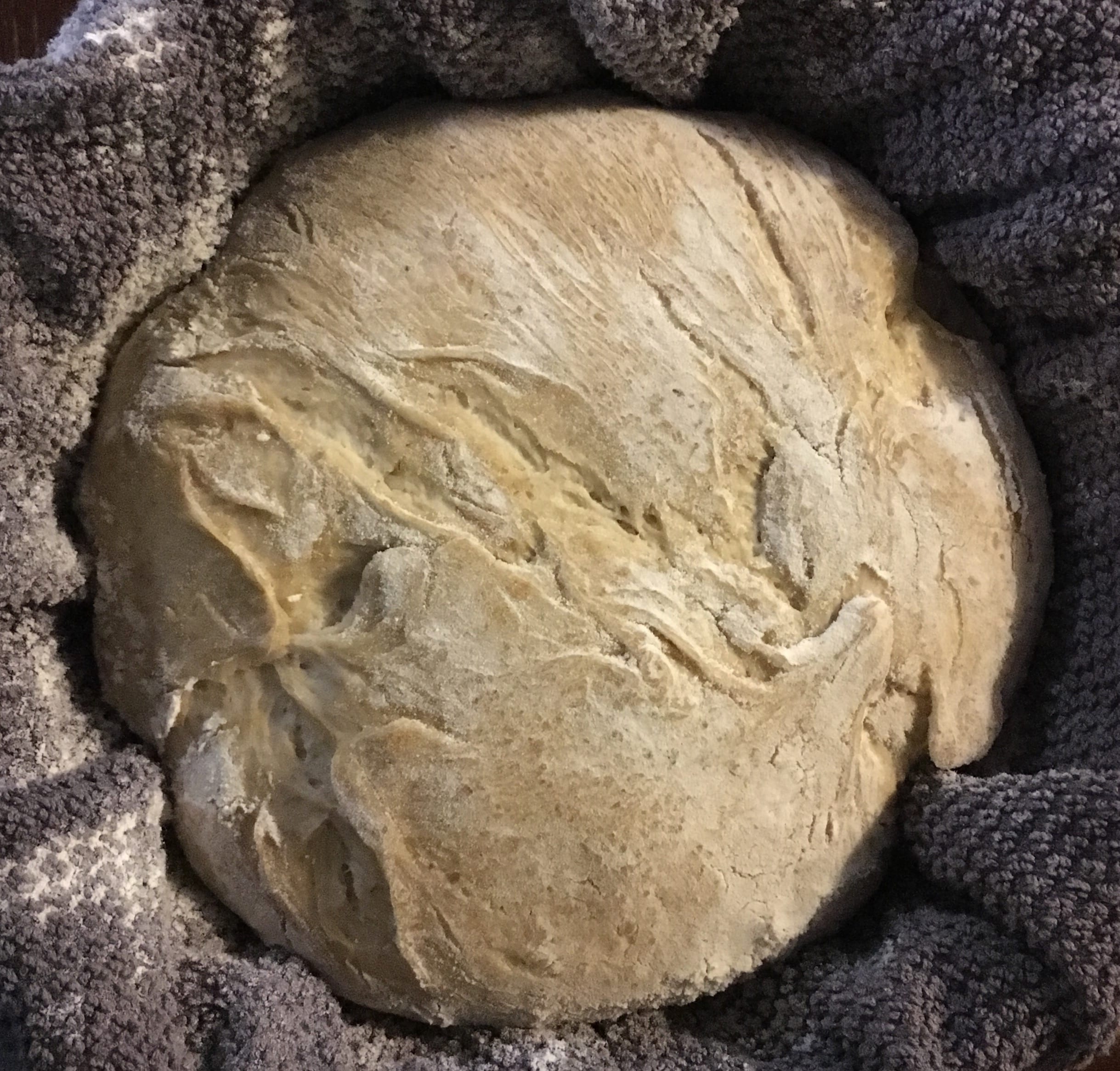 The bottom side of the dough seemed to dry out a bit in the fridge, but that didn’t appear to affect the bake. 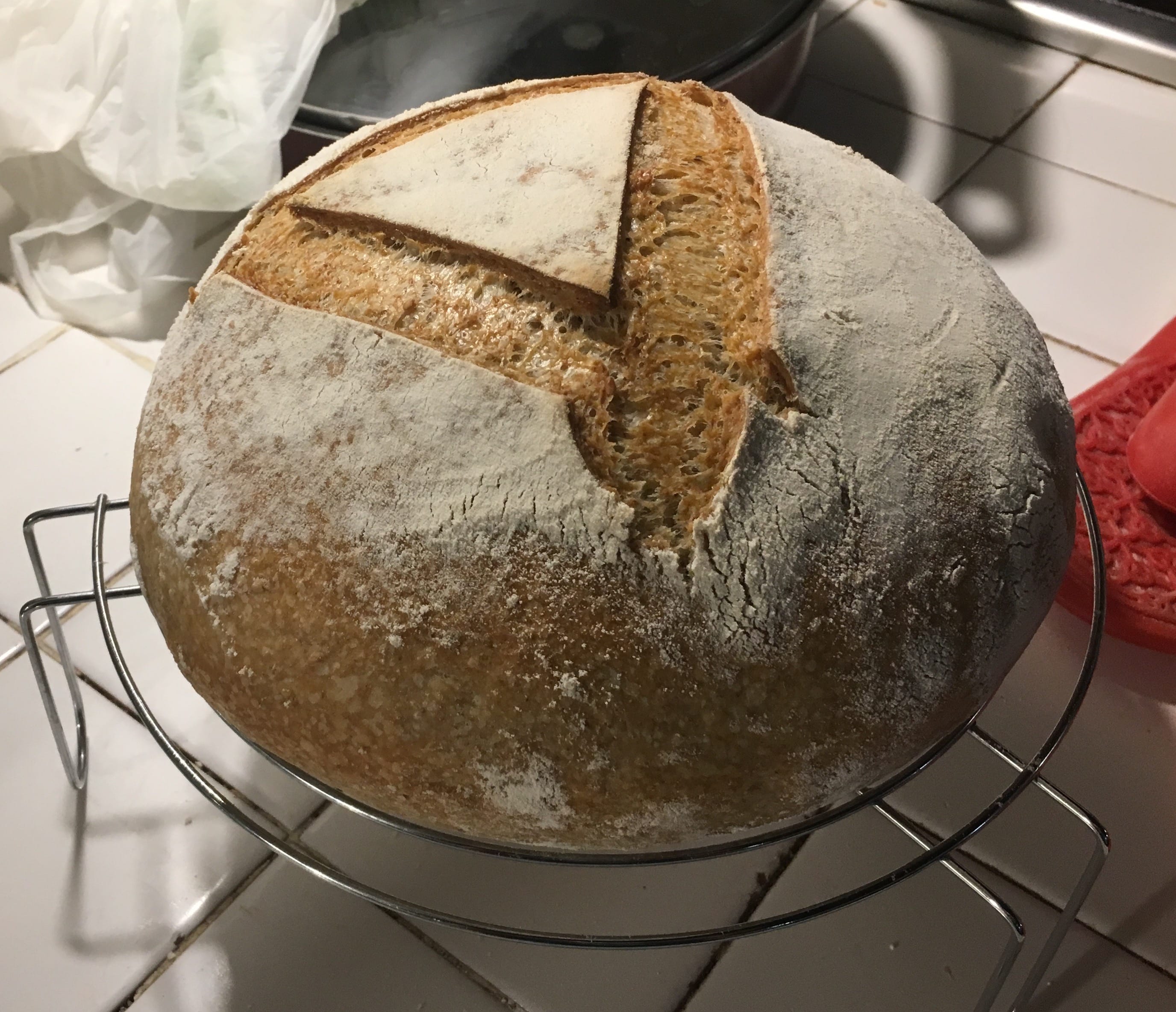 And of course the crumb:

I’m not sure whether it was the different flours, longer proof, or increase in salt that made this loaf taste amazing, but it was likely a combination of all the factors.

I am not convinced that the more complicated folding/rising procedure really did much, since the rise and crumb are about the same as past attempts. Though I suspect that this may be due to my using a fairly small pot, so the dough is too heavy on itself to really support much more rising. Also, I used a larger proportion of heavier flours which likely also affected the rise.

Regardless, I am extremely happy with how this bread turned out. I would like to start experimenting now with which steps are really necessary, and add yet more different ingredients to see their effects.