Today we’re trying out something entirely new. I’m going to use this recipe instead of one of the recipes that I’ve worked on in the past. Though it is fairly similar, it uses a slightly higher proportion of flour, which I hope will make the dough more manageable (and easier to knead) while still allowing for good oven spring and lightness. The bulk fermentation time is also about an hour longer, but overall the recipe does not deviate much from One-Day Sourdough so it should provide a reasonable comparison.

I should note that I don’t have a scale with me, so I approximated the measurements:

Of course, having exact measurements would be nice for repeatability, but flour doesn’t all necessarily behave the same way anyways, so 🤷🏻‍♂️.

I (inadvertently) mixed up enough dough for two loaves, so I decided to bake one using the tried-and-true covered pot method to generate steam, and the other using a different method as suggested in the recipe: in an uncovered Pyrex dish, but with a cookie sheet filled with hot water also in the oven, which is meant to create steam. This also meant that I used different techniques for forming the two loaves; for the oblong loaf, I tried to follow this method and was mostly successful, though the bottom did separate a little bit during the proofing stage.

NB: I also added raisins to the bread in the covered pot, but I am going to ignore that for the remainder of this discussion because I don’t think it had a significant effect on the finished loaf.

One other thing I did notice was that the gluten seemed to tighten up and become very difficult to knead after a few minutes. Letting the dough rest for a little bit before resuming helped with this. It was difficult to obtain the silky smooth surface shown in some videos, and I wonder if this is due to the sesame seeds that I added to the dough before kneading. In the future, I may try adding these after the bulk fermentation to see if that makes kneading easier.

And now, onto the results! 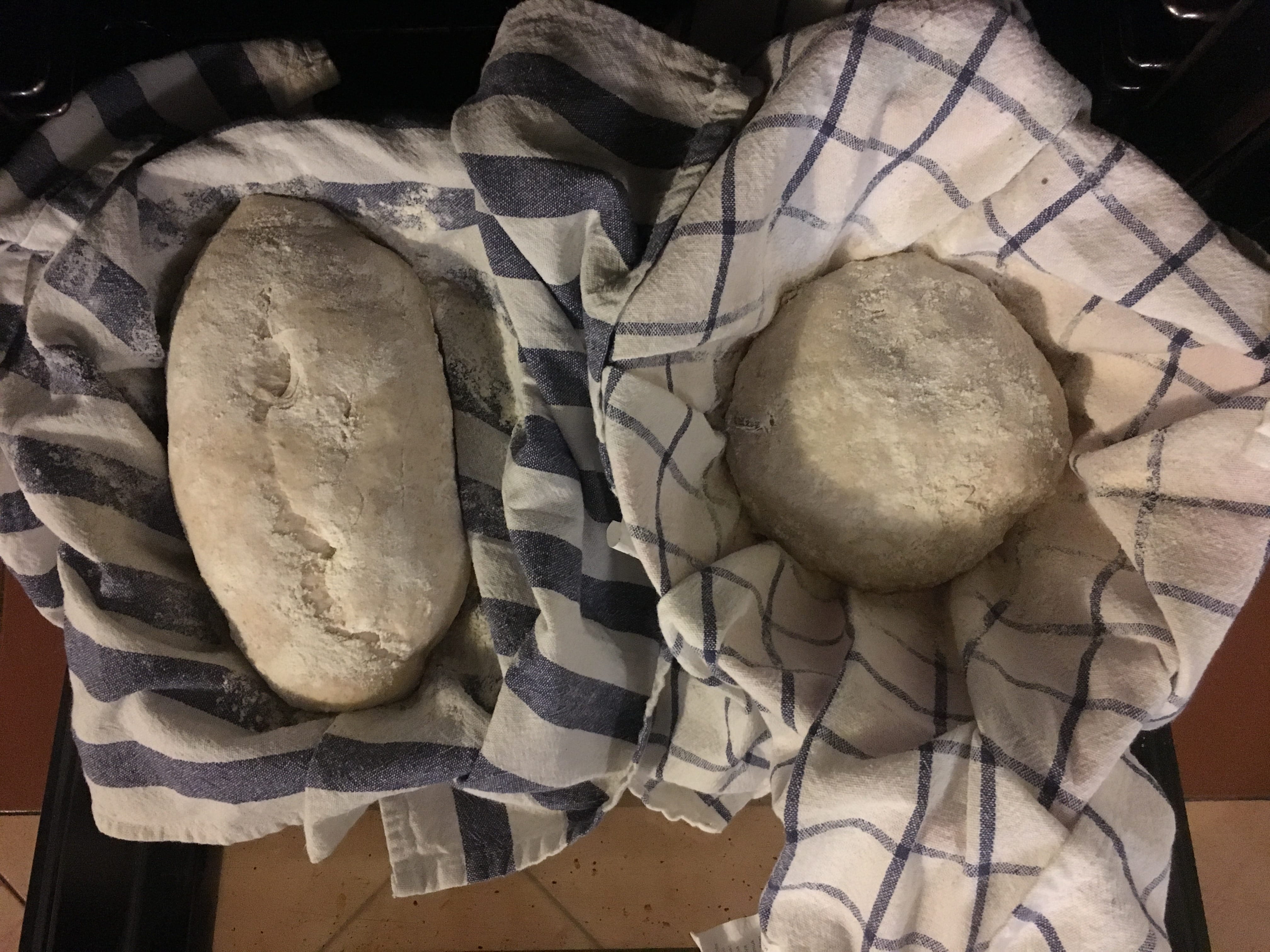 This shows both of the formed loaves in their respective proofing containers. I had to improvise a non-rounded one using some Tupperware so that the loaf would fit the Pyrex dish that I had available. 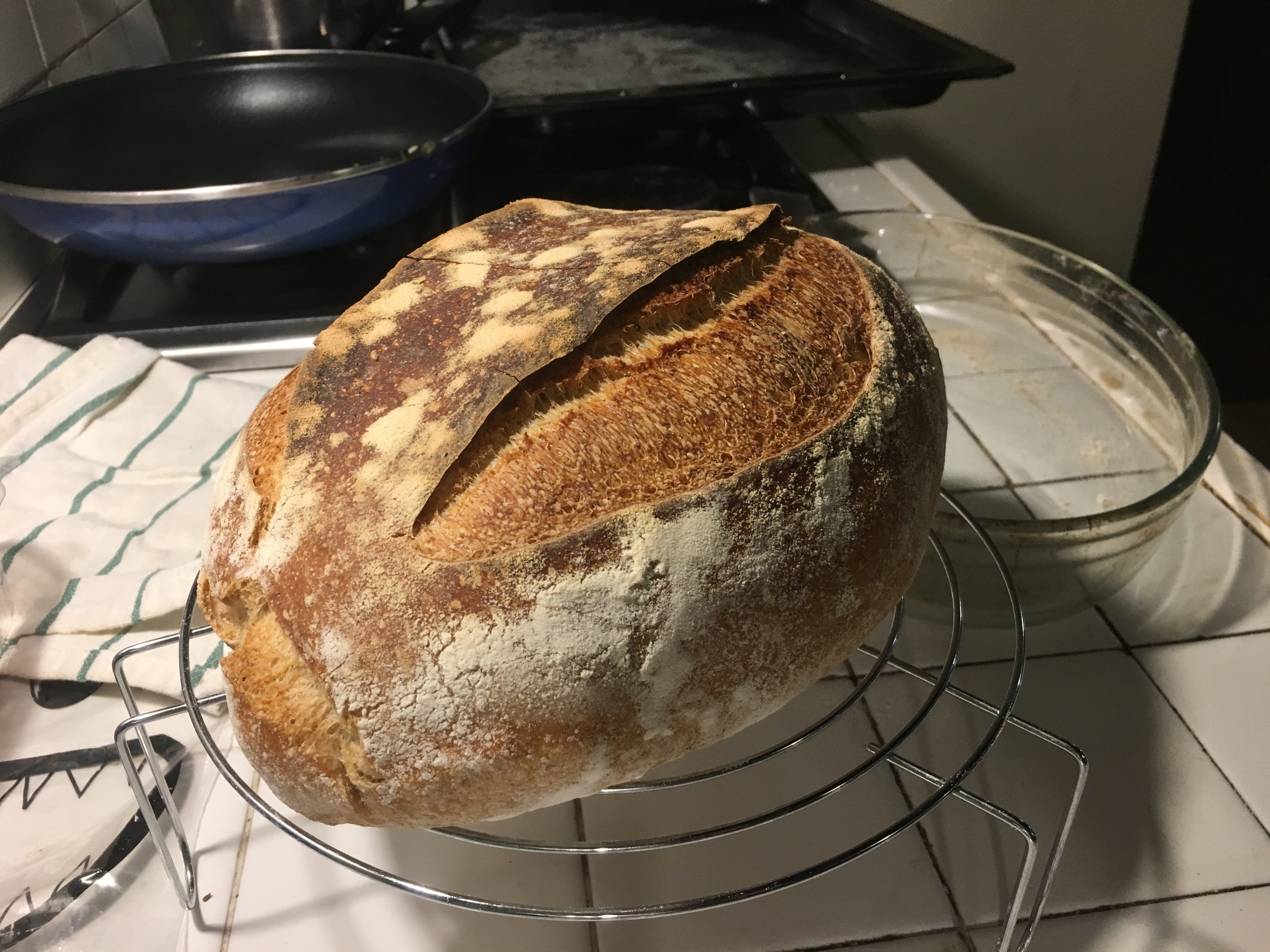 The baked oblong loaf. You can see that the edges were not entirely square like I had hoped. But this is purely cosmetic, and didn’t appear to affect the baking. However, I did notice that the bottom of this loaf did not develop nearly as much of a crust as the loaf baked in a pot. I would guess that this is due to the higher amount of steam in the oven, which may have collected in the bottom of the dish. It’s also possible that, since I placed the steam-filled cookie sheet below the bread, the bottom did not heat as much as it should have. I removed the cookie sheet for the last 10 minutes or so of the bake, which helped a bit. 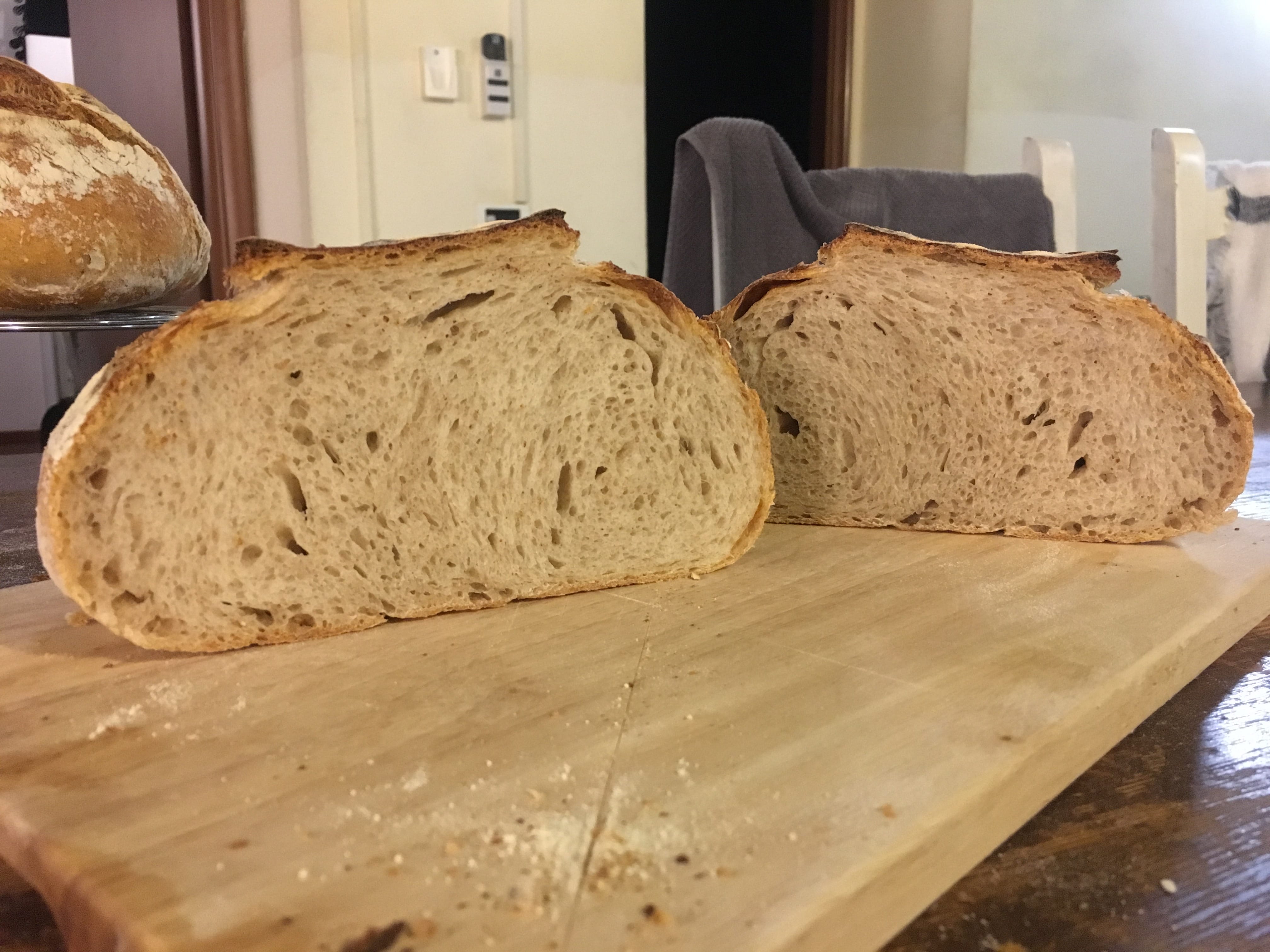 Crumb shot of the oblong loaf. 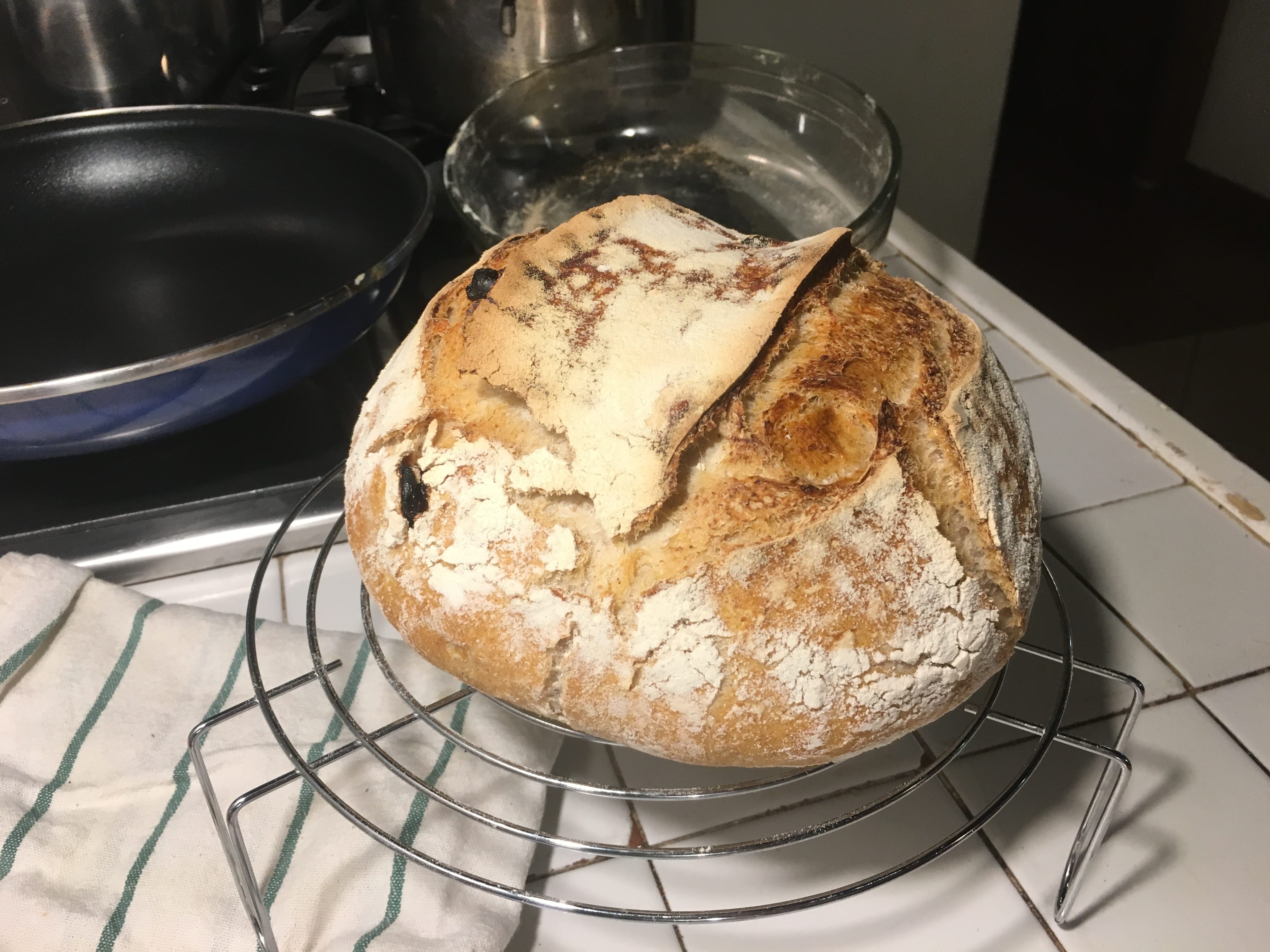 The baked round loaf. This turned out very similarly to past attempts (not a bad thing, of course!) 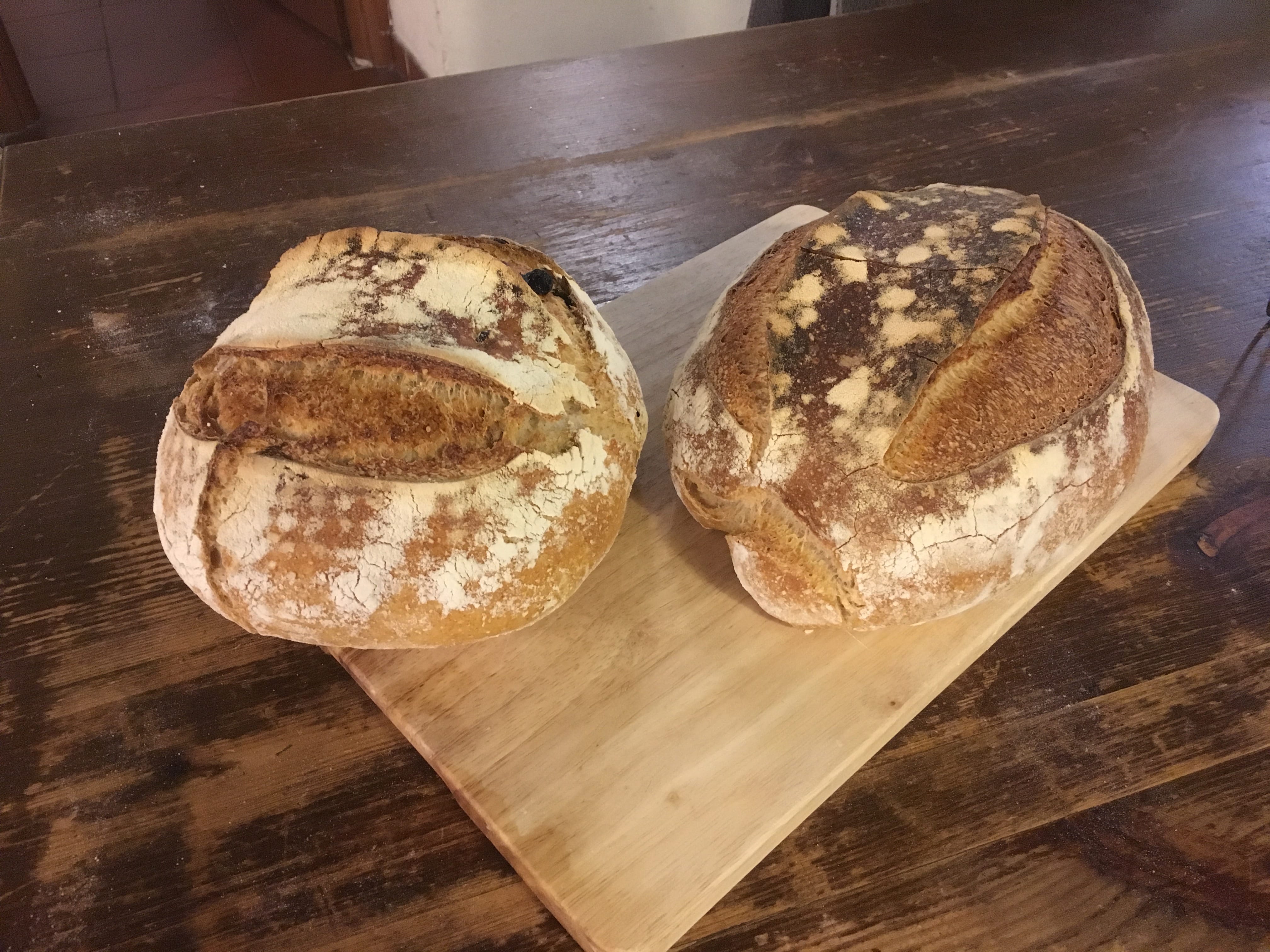 Overall I am quite pleased with how these turned out, particularly the uncovered loaf, since I’ve never used the “steam the entire oven” technique before. They’re not particularly sour, and I think they could use a bit more salt, but otherwise they’re quite good. To achieve a more sour taste I think I would need to “starve” the starter a bit longer so it produces more acid.