This was the last weekend of my study abroad program, so I decided to make one final loaf 😔 before we all went our separate ways. The bread on this trip was great, but the people were even better. I feel truly lucky to have participated in such an amazing experience with a wonderful group of new friends.

I took out a little piece of starter the night before and mixed it with about 2 cups of flour and 1 cup of water. In the morning it was nice and bubbly.

The next morning, I mixed up 3 cups of sifted whole-wheat flour1 with about 1.5 cups of water to form a wet, shaggy dough. I let that rest and autolyse (before adding the starter) for 90 minutes.

After that, I mixed in a large spoonful of salt and the starter. The resulting dough is very high hydration, so instead of attempting to knead it, I used the Rubaud Method and “pulled” the dough for about 10 minutes. I let the dough rest 15 minutes then pulled it for 5 minutes longer.

Then, I let the dough ferment at room temperature for about 8 hours, stretching and folding it every 30 or so minutes. It’s not important that you do folds exactly on the half hour, but that’s a good interval to aim for, more or less.

After the fermentation period, I attempted to form a loaf with…limited success. The dough was still quite wet, and all I had was a tiny cutting board. I also didn’t use any flour but, in hindsight, it would likely have behoovenbehooved? me to use a minimal amount of flour on the parts of the loaf that don’t need to stick together. I think this would have made the dough easier to handle. 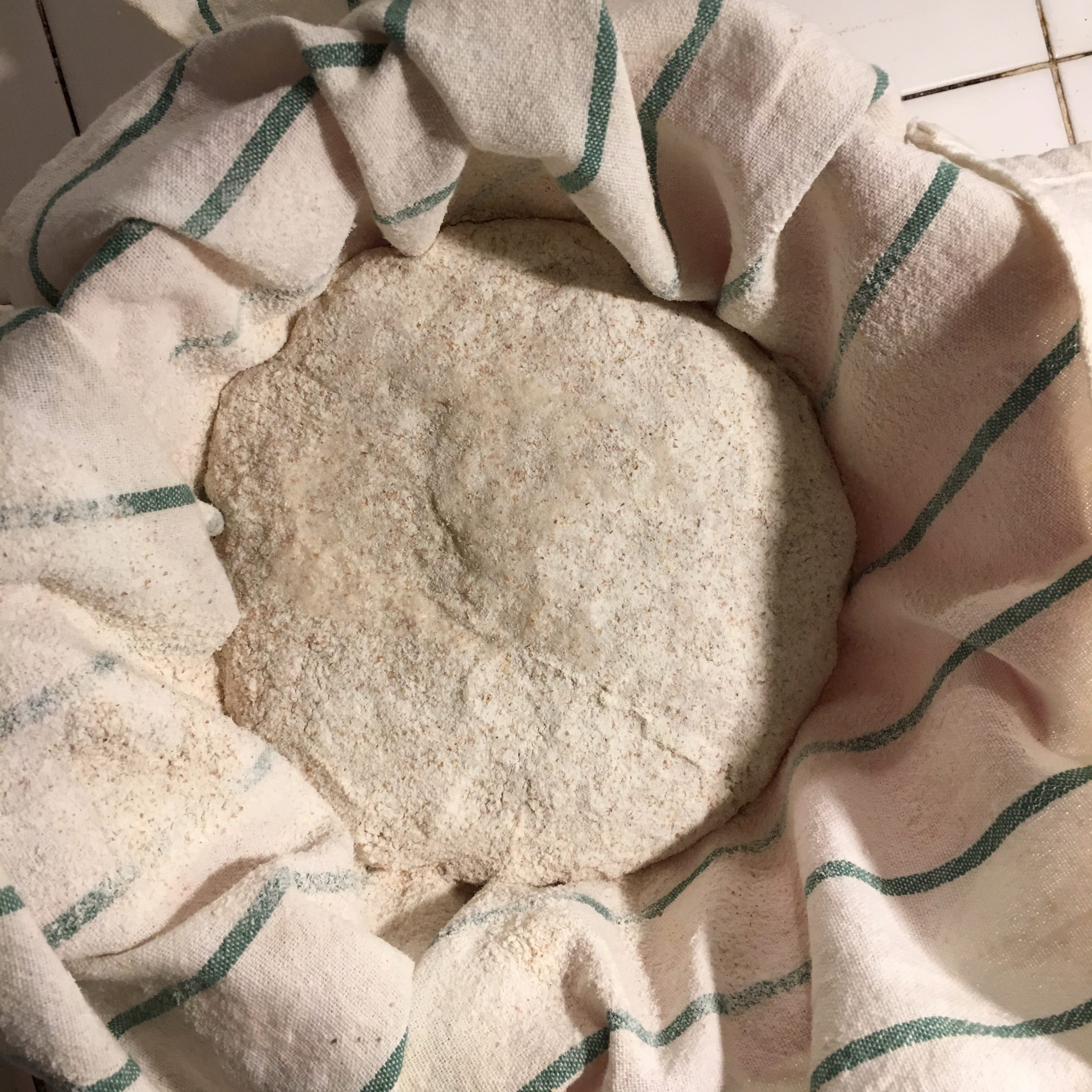 At any rate, I dumped the loaf-ish thing in a flour- and dish towel-lined bowl and let it cold proof overnight in the fridge. The next morning I baked the bread in a pot with the lid onn at 500F for 30 min, followed by 450F with the lid off until I liked the color of the crust (about 20 min).

In the end, my bad loaf formation didn’t seem to negatively affect the ovenspring too much. The taste was great, too! It was one of my more sour loaves, which I really liked. 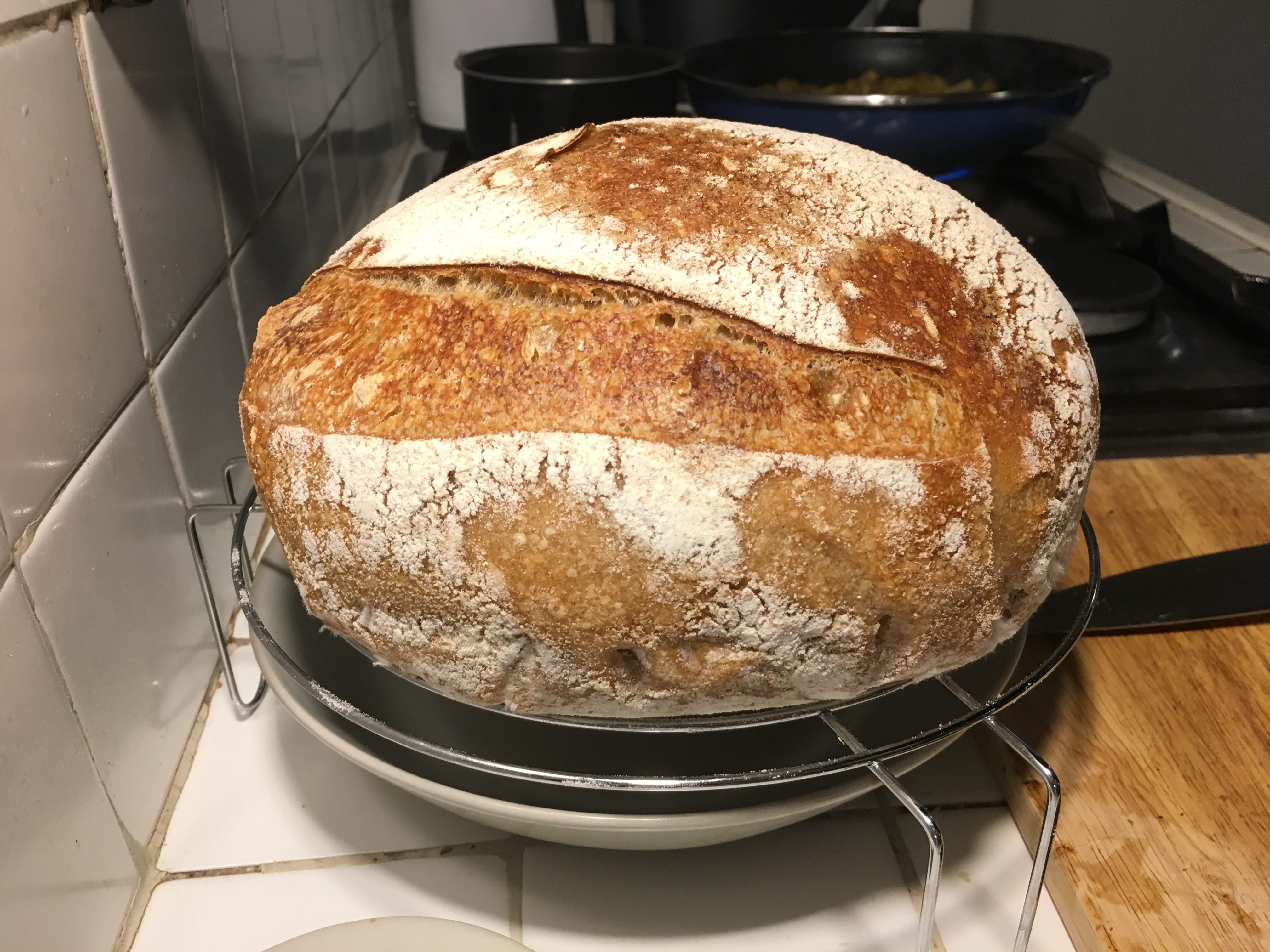 Look at those big alveoli! That nice, airy crumb (at least in some parts of the bread). I think better loaf-forming skills would have helped with crumb consistency, but I’m still happy with how it turned out. 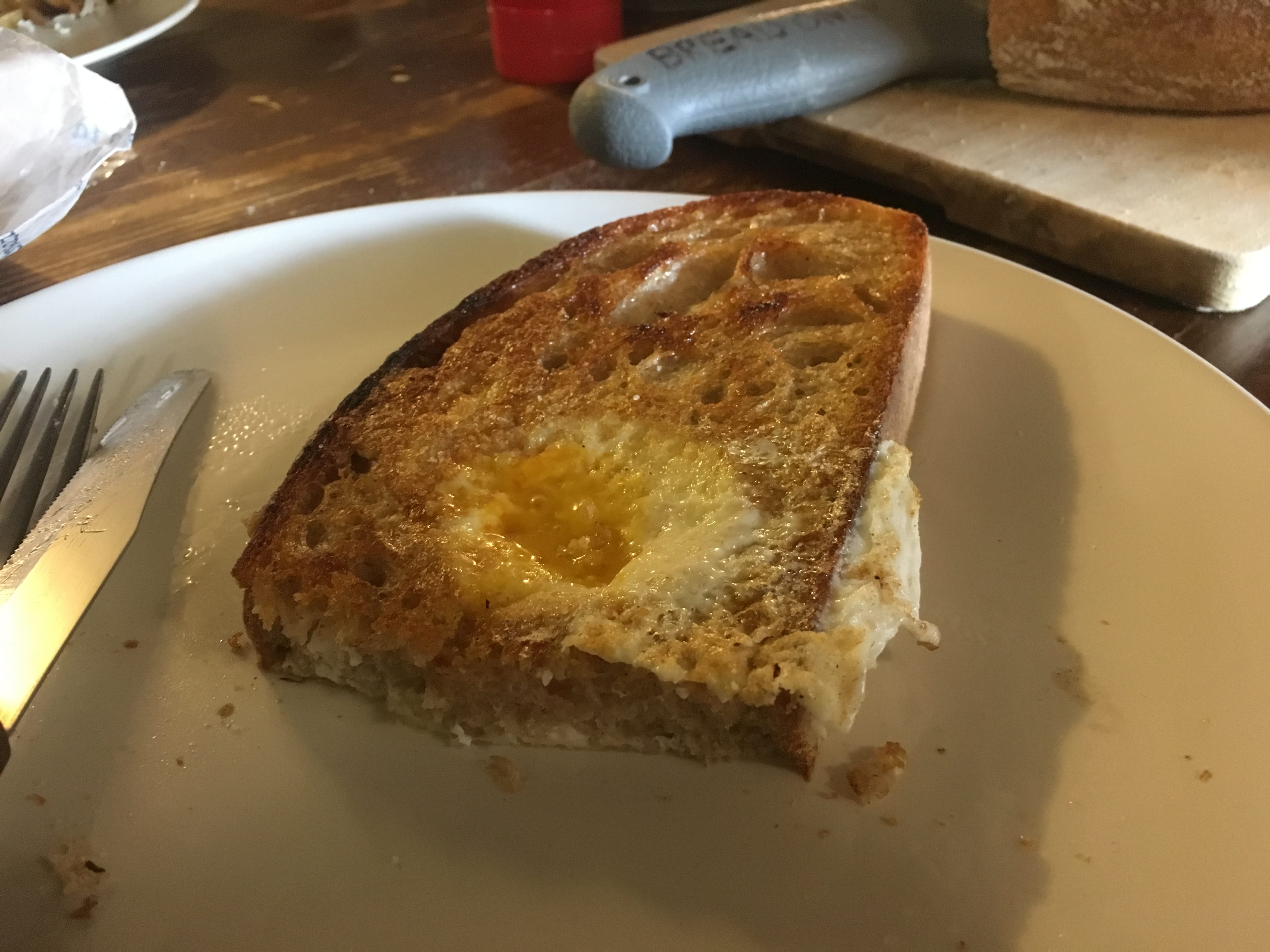 Also great as a toad-in-the-hole.

1 I sifted the flour to remove the large bran flakes that I read can impede the bread rise by popping gluten bubbles. I intended to roll the top in the bran before baking the bread, but I was rushing to get it in the oven, and I forgot.